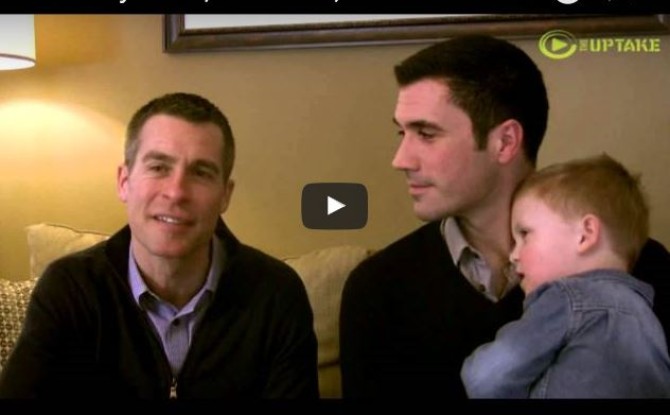 Four-year-old twins Emmet and Gabriel are pretty typical kids. They like to play outside. They like puzzles and toy cars. And they’re curious about new gadgets. They also like to cuddle in their parents’ arms, and sometimes they need extra attention.

Emmet and Gabriel have pretty old-fashioned parents, who tied the knot before they moved in together, who always knew they wanted to have kids, who try to attend church on Sundays, who share dishwashing and laundry duties, and who put the boys to bed by 8 p.m. every night. Except that their parents, Paul Melchert and James Zimmerman … are gay. “On our third date, both of us realized that this was turning into something that was going to last for a long time,” says Melchert, a pediatrician in Minneapolis. “Going into this, I very much wanted to become a parent, and was hopeful that James did too.” Like many parents, watching their children being born was one of the most powerful moments of their lives. In Melchert’s and Zimmerman’s case, a surrogate mom delivered the twins, but needed an emergency caesarian section. Both dads were in the room during the birth. “To hear your son cry for the first time as he came out, and then number two we heard cry,” Melchert recalls, as he points to a framed photo on their mantel of Emmet, just moments after his birth, comforting his crying twin brother Gabriel. “It was really an incredible moment.” Melchert and Zimmerman celebrate the seventh anniversary of their unofficial wedding at the end of April. They held a service on April 29, 2006, at Macalester Plymouth United Church in Saint Paul for approximately 40 family member and close friends. They walked in to the chapel holding hands, and walked out holding hands. “The moment that stands out most for me is just standing with the minister in front of an alter with all of our family sitting there,” Zimmerman recounts. “I particularly remember a beautiful toast speech that my father gave, welcoming James and acknowledging that it was two families coming together,” says Melchert. “How much they cherished James and how much they loved having him as part of their new life. He always said that, as a parent, you love your children, and you also love who your children love. To hear my father say that, and get a little tearful when he said it, was really impactful for me.” On election night last November, they gathered together with opponents of the ballot amendment that would have constitutionally banned same-sex marriage. But like many Minnesota parents, they couldn’t stay out too late because it was a weeknight. “It was really exciting being there with a large group,” says Melchert. “It got late and our babysitter needed to go home, so we came home early. But we watched the returns on TV and on our iPad. We were about to go to bed, and all of a sudden James refreshed the screen and they had checked it.” “In the morning we woke up and got excited again, then we realized we were celebrating that there wasn’t a constitutional ban on our relationship — which isn’t quite the same as celebrating marriage equality, but it was a first step.” In response to a legislative push to legalize same-sex marriage in Minnesota, some Republicans suggested that the state instead enshrine civil unions. But Paul Melchert says, that’s not good enough. “The rights, benefits and privileges that come from a legally recognized marriage cannot be obtained by any other means,” he told journalists during a press conference at the State Capitol earlier this year. “All families benefit from the reassurance that comes from knowing that your family is safe and secure.” “When you’re out in public or when you’re talking about your family and you say ‘my husband’ or ‘my wife’, there’s an automatic acceptance and understanding of the importance of who that is. I don’t think everybody always recognizes that if you say ‘my boyfriend’, ‘my girlfriend’, ‘my spouse’ or ‘my partner’, it doesn’t carry that same important meaning.” Melchert, a pediatrician, adds that years of studies show that kids of gay couples do just as well as kids of heterosexual couples.

An Australian senator is expected to propose legislation which would recognize the international marriages of gay and lesbian couples.

Greens Senator Sarah Hanson-Young said she would introduce the bill next month.

The move comes a day after nearby New Zealand approved a gay marriage bill.

“Australia same-sex couples are now lining up to get married in New Zealand and the sad thing is they are not going to be recognized here,” Hanson-Young told ABC News 24. “They shouldn’t have to leave their marriage at the customs gate.  Let’s recognize overseas marriage here in Australia.”

The French Senate has approved adoption for same-sex couples.

On the evening of 10 April, the second article of the ‘Marriage for All’ bill was adopted by the upper level of French parliament.

The vote came just one day after the Senate approved Article 1, the provision allowing gay couples to marry.

The Senate must now complete a review of the legislation in its entirety, although passage of both articles almost guarantees gay couples will soon be able to marry and adopt in France.

Once approved, the bill will go back to the National Assembly in late May for final approval. It will then go to the French President François Hollande to sign into law.

The lead investigators on a large study of the effects of oxygen levels on extremely premature babies failed to inform the infants’ parents that the risks of participating could involve increased chances of blindness or death, the federal Department of Health and Human Services has warned in a letter.

The Office for Human Research Protections, which safeguards the people who participate in government-funded research, sent a letter to the University of Alabama at Birmingham last month, detailing what it said were violations of patients’ rights.

Some of the 1,300 infants who participated in the study, which took place between 2004 and 2009, would probably have died or developed blindness even if they had not taken part. They were born at just 24 to 27 weeks gestation, a very high-risk category. But being assigned to one or the other oxygen group in the study increased their chances further, a risk that was not properly disclosed, the office said

The Child, the Tablet and the Developing Mind

By NICK BILTON – The New York Times,
March 31, 2013
I recently watched my sister perform an act of magic.

We were sitting in a restaurant, trying to have a conversation, but her children, 4-year-old Willow and 7-year-old Luca, would not stop fighting. The arguments — over a fork, or who had more water in a glass — were unrelenting.

Like a magician quieting a group of children by pulling a rabbit out of a hat, my sister reached into her purse and produced two shiny Apple iPads, handing one to each child. Suddenly, the two were quiet. Eerily so. They sat playing games and watching videos, and we continued with our conversation.

After our meal, as we stuffed the iPads back into their magic storage bag, my sister felt slightly guilty.

“I don’t want to give them the iPads at the dinner table, but if it keeps them occupied for an hour so we can eat in peace, and more importantly not disturb other people in the restaurant, I often just hand it over,” she told me. Then she asked: “Do you think it’s bad for them? I do worry that it is setting them up to think it’s O.K. to use electronics at the dinner table in the future.”

I did not have an answer, and although some people might have opinions, no one has a true scientific understanding of what the future might hold for a generation raised on portable screens.

“We really don’t know the full neurological effects of these technologies yet,” said Dr. Gary Small, director of the Longevity Center at the University of California, Los Angeles, and author of “iBrain: Surviving the Technological Alteration of the Modern Mind.” “Children, like adults, vary quite a lot, and some are more sensitive than others to an abundance of screen time.”

But Dr. Small says we do know that the brain is highly sensitive to stimuli, like iPads and smartphone screens, and if people spend too much time with one technology, and less time interacting with people like parents at the dinner table, that could hinder the development of certain communications skills.

(CNN) — Of all the arguments swirling around the legality of same-sex marriage, it’s clear that a major concern is, as always, the kids.

Supporters argue that same-sex parents need to provide their children with a stable and supportive family home, complete with the legal protections afforded heterosexual married couples. Opponents claim that children raised by same-sex parents are wounded in some fundamental way by being denied the “normal” benefits of having both a mother and father at home.

What is lost, remarkably, in both these arguments is the science that enabled families headed by same-sex couples to exist at all.

Until recently, families had to consist, at least at the outset, of a mommy and a daddy, each biologically necessary to bring children into being. Even if the mother died in childbirth or the father disappeared shortly thereafter, the physiological basis of the nuclear family remained intact: one mother, one father, and a child conceived of their union.

It Is Time for the U.S. to Cover IVF (for Gays and Lesbians Too)

This week the United Kingdom joined the ranks of countries like Israel and Canada that provide in vitro fertilization (IVF) treatment to citizens under a certain age (42 in the U.K.) who can’t have children without it. That includes gays and lesbians. When it comes to helping people form the families they long for, the United States is woefully behind. The U.S. has among the lowest rates of IVF usage of any developed country in the world, owing in part to boasting the highest cost for the procedure, on average $100,000 per successful pregnancy.

Among the handful of states that require insurers to cover IVF, many carve out exclusions for same-sex couples and people who aren’t married. These singles, gays, and lesbians are sometimes called “dysfertile” as opposed to “infertile” to emphasize their social (rather than just biological) obstacles to reproduction. The U.S. should expand IVF coverage for the infertile and include the dysfertile too.

The U.S. Supreme Court has held that the inability to reproduce qualifies as a health-impairing disability under the Americans with Disabilities Act. The commitment to universal health care that we renewed in President Obama’s health reform act invites us to understand the infertile and dysfertile alike as needing medicine to restore a capacity–for “[r]eproduction and the sexual dynamics surrounding it”–that is, in the words of the Supreme Court, “central to the life process itself.”

It is true that dysfertility fits less comfortably within the medical model. But why should that alone make less worthy the desires of gays and lesbians to have a genetic child? Joe Saul, the protagonist in John Steinbeck’s 1950 play Burning Bright, put it best:

A man can’t scrap his bloodline, can’t snip the thread of his immortality. There’s more than . . . the remembered stories of glory and the forgotten shame of failure. There is a trust imposed to hand my line over to another.

My impulse to create a biological family, to raise “my own” children, to “hand my line over to another” is shared by people single or married, black or white, gay or straight. And the arguments against IVF subsidies fall short.