TRENTON, N.J. (CBS/AP) — Gov. Chris Christie and lawmakers have struck a deal to allow people adopted in New Jersey access to their birth records, but the compromise puts the opening of records on hold for nearly three years to give birth parents time to have their names removed from birth certificates.

The deal is expected to become law, with Democratic leaders in both chambers of the Democrat-controlled Legislature hailing it. It would cap a 34-year push by a group of advocates for adoptees and their biological parents to open the records in New Jersey for the first time since they were sealed in 1940.

A Queens man may legally adopt his husband’s biological twins even though they were born to a woman under a surrogacy agreement that is illegal in New York state, a Family Court judge determined.

Judge Barbara Salinitro (See Profile) ruled that the best interests of the twins is the most important consideration in weighing the adoption petition of a man identified in court papers as “J.H.-W.,” not that the surrogacy agreement that reulted in their birth is “void and unenforceable” under New York law.

A home study provided to the court showed that the children are “thriving” in the care of J.H.-W. and his same-sex spouse, “M.H.-W.,” the judge said.

“The court is not being asked to enforce the surrogacy contract that forms the basis for the adoption, nor does the relief sought include claims relating to the surrogacy agreement itself,” Salinitro wrote in Matter of J.J., A-19-20/14. “Rather, the proposed adoptive parent…wants desperately to have equivalent legal status as the birth parent, which is what the couple had always envisioned as they proceeded on their bumpy road towards starting a family together, and is prepared to assume the rights and responsibilities that accompany legal parentage.”

To that end, the judge continued, the surrogacy agreement with the woman who bore the children in Mumbai, India, in 2013 is of “no consequence” to the adoption proceeding in Queens. 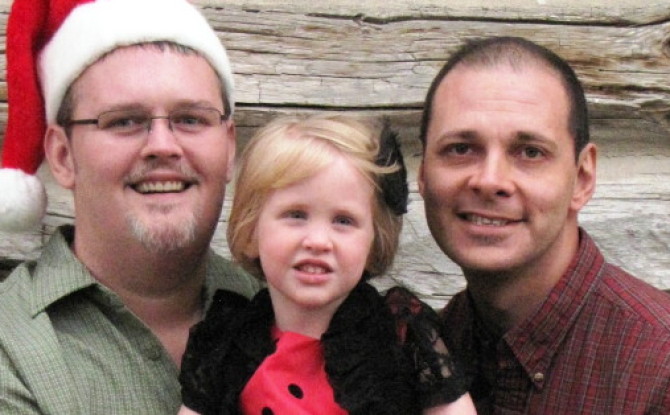 Some LGBT parents are sensitive about being outed in the communities in which their families reside. Fathers Dave and David Bocanegra, however, have grown accustomed to being outed on a regular basis. Their 4-year-old daughter Dahlia very proudly tells everyone she meets, “I have two daddies!”

“Despite living in Utah,” said Dave, “we have actually been treated very well in our community. My husband volunteers at our daughter’s school every week and her teacher even added same-sex parents to the classroom discussion about families.” 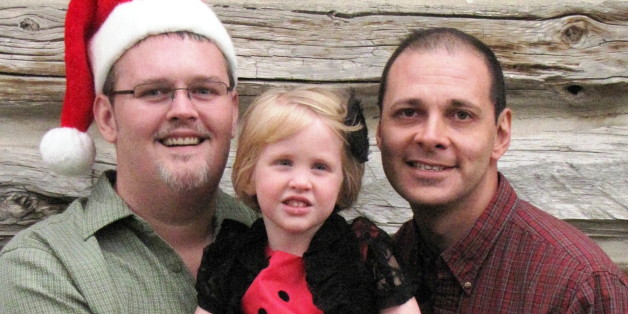 David Taylor-Bocanegra, 38, works as the office manager of a Salt Lake City hospital. His husband, David Bocanegra, 39, is a registered nurse. To mark their 15th anniversary, the couple flew to California to be legally married. Their path to parenthood together, however, was a roller coaster ride of emotions.

Dave and David used to have many long talks about whether or not they would have children.

“One day,” said Dave, “David and I were talking about where we were in our lives and whether or not children would be possible. I remember crying because I had come to the conclusion that having a child might never happen for us. God must have heard me, because we got a call the very next day that completely changed our lives.”

Dave’s life-long friend had called them to tell them she just learned that she was pregnant. After years of being told she could no longer have children, she was totally surprised by this pregnancy. As a single mom with two teenage boys, she felt unprepared to raise the child herself and asked Dave and David if they would adopt the baby.

“That’s the 100 percent truth,” exclaimed Dave, “but the adoption was rocky, because even though the mother knew it would be hard to raise another kid on her own, the decision was a difficult one to live with. It was especially hard when she found out the sex of the baby, because she had always wanted a girl.”

TO appreciate how rapidly the ground has shifted, go back just two short years, to April 2012. President Obama didn’t support marriage equality, not formally. Neither did Hillary Clinton. And few people were denouncing them as bigots whose positions rendered them too divisive, offensive and regressive to lead.

But that’s precisely the condemnation that tainted and toppled Brendan Eich after his appointment two weeks ago as the new chief executive of the technology company Mozilla. On Thursday he resigned, clearly under duress and solely because his opposition to gay marriage diverged from the views of too many employees and customers. “Under the present circumstances, I cannot be an effective leader,” he said, and he was right, not just about the climate at Mozilla but also, to a certain degree, about the climate of America.

Something remarkable has happened — something that’s mostly exciting but also a little disturbing (I’ll get to the disturbing part later), and that’s reflected not just in Eich’s ouster at Mozilla, the maker of the web browser Firefox, but in a string of marriage-equality victories in federal courts over recent months, including a statement Friday by a judge who said that he would rule that Ohio must recognize same-sex marriages performed outside the state.

The Centers for Medicare & Medicaid Services (CMS) announced today that same-sex spouses will be recognized in administering several aspects of the Medicare program, regardless of where the couple lives. CMS works with the Social Security Administration to conduct eligibility determinations and to enroll seniors and individuals with certain disabilities in the program. Social Security updated their own marriage recognition policies earlier this week to streamline the handling of marriage-based claims involving transgender people. The announcement is the latest step implementing the Supreme Court’s decision overturning the Defense of Marriage Act (DOMA).

Social Security will now begin processing Medicare enrollment, requests for Special Enrollment Periods, and requests for reductions in late-enrollment penalties  for many same-sex spouses. Eligibility for Medicare Part A and Part B coverage is particularly important for these families, who are disproportionately likely to be uninsured. Medicare Part A coverage is often available without paying a monthly premium, making it important for the many lesbian, gay, and bisexual people who struggle to afford coverage.